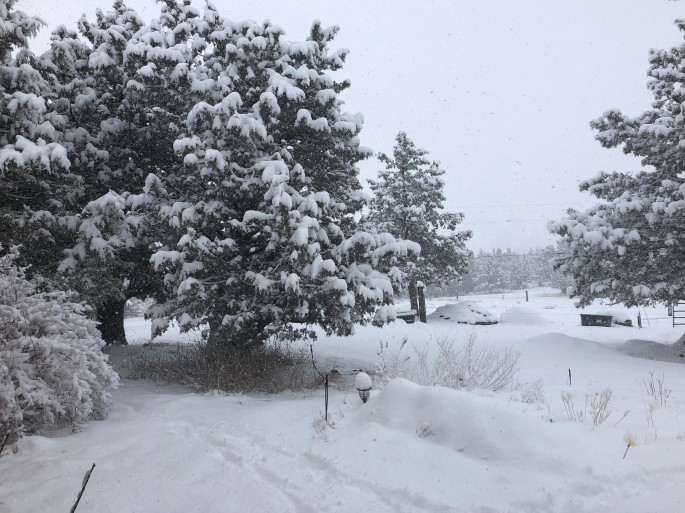 The snow is gently falling on the winter garden at the moment.  What foliage remains is either covered in winter white or exposing the brown leaves of dormancy.  The overall landscaping is breathtaking.  The air feels crisp and clean on my skin as I walk out to feed the equine. My mind flits about from thought to thought like the falling snowflakes while ignoring the crunching sounds from walking through the snow … I wondered…

Why today, do I feel the drive to sit and write?  Was it due to the heartfelt email from my old friend in British Columbia wishing me a merry Christmas this morning?  Or the text sent only minutes later from another old friend from Alabama mentioning the bounty found of blogs written by me from years ago.  Both men are eloquent writers.  Did their contacts spark the dormancy found within this blog writer?

It’s been a while since posting my last blog about poor irrigation design.  Did I leave the reader wondering about the outcome of that park audit and meeting? Are you surprised to hear the pipe from the well delivering the water was rotten and failing to deliver water to each station?  My ponderings didn’t focus on that question but the reason why these fingers didn’t find my keyboard to share the bounty of garden crops coming in and what needed to be done with that bounty!

This story could have been timelier as I was literally laid up from hip replacement surgery when the first frost warning came about.  My tomato plants were loaded down with an abundance of very ripe to very green fruit.  My son, Randy was here assisting and spoiling me as his sister, Lynette had done the previous week.

While here, Lynette had the pleasure of randomly picking veggies in the garden and preparing sumptuous meals with the bounty as the sun invited her to take in its warmth and encourage her to take a break from the computer and her job from 300 miles away. However, the following week’s sun departed with a report warning of freezing temperatures that I knew would take out the garden overnight.

Alas, Randy was the designated gardener and responded to the plea from this (at this point) invalid to clear out the garden.  Sometime later, he came into the house shaking his head asking why I had planted so many tomato plants.  Thinking back, six plants didn’t seem like a huge amount, but six plants in well prepared fertile soil produced well over 150 pounds of tomatoes still left on the vines!  He grabbed multiple boxes and assorted the fruit into ripeness and separated the Roma type tomatoes from the slicers.

It was only a matter of time to work with those ripe tomatoes.  Once ambulatory, Randy left me to my own devices. Under the circumstances, I knew canning was out of the question as I gimped about, but could I manage fire roasting in my oven?  The answer was yes, that also came along with an excellent source of exercise and a weary body producing gallons of pureed killer tomato sauce!

How the mind works, and ponders!  The mind never stops. More ponderings today? The mail brought in one of my favorite seed catalogs…which seeds do I select or try new this coming year? Prized Christmas cookies recipes need to be baked – but which ones? Gift giving require a whole lot of thought, and whoa onto me -contemplatation of what to do with the wheelbarrow full of winter squash still sitting in the garage! Stay tuned for this surprise!

Meanwhile, enjoy the moment!  Embrace those around you and let that busy mind take a break.  Be safe, happy and stay healthy!